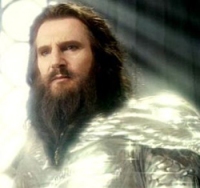 Religion. Here’s a topic guaranteed to piss off anyone. If you don’t believe me, take a minute to turn to the person on your right and say, “I’d like to talk to you about Jesus.” Believe me now?
I don’t consider myself to be a religious person. I go to church most Sundays, more for my family than myself. I believe in the organized church and all the good that can be done in a church community. Unfortunately, a lot of bad can also be done by church communities. It’s possible to convince a person to do almost anything if they can be made to believe they are doing it for religious reasons, and groups of people are more suggestable than individuals. It’s my opinion that religious faith is a delicate balance of hope, ignorance, and suppressed disbelief. As long as the latter makes up less than half of your faith triangle, you probably consider yourself a religious person. If a big enough piece of that pie is made up of ignorance, you could probably be incited to blow up yourself or your neighbor if the request was preceded with “God says”. If your triangle is made up only of hope and ignorance, you should probably let someone else hold your wallet.

As a child my religion was built solely on ignorance. I believed because I was told to. The same is true of a child’s belief in Santa Claus. As I matured, hope moved in. My hope was informed by my burgeoning fear of death. I hoped there was a heaven, and I hoped to go there if I died. As my experience grew, I began to find there were many religions that were different from my own, some even disagreed with the most fundamental things I believed in. Some have a hell and a devil to stand in contrast to their god and heaven, and some don’t. Some have a messiah and some don’t. Some don’t have a heaven at all, but instead believe in reincarnation. Some have no heaven and no reincarnation. Some religions once dominated the earth, and are now laughable and quaint. Some have many gods, and some just one. Some have demi-gods and some don’t. Which one is right?

Let’s check the evidence. Uh oh, there is no evidence. None at all. Well, there are a bunch of scientific studies showing that prayer has absolutely no impact on results. There are also a bunch of studies attempting and failing to prove the existence of the human soul. This is where disbelief was born, and immediately suppressed. As Christians, we are taught that the only unforgivable sin is to deny the Holy Spirit, and God knows what we’re thinking. So I had to work hard to suppress the doubt and the denial that would surely follow. Because if we doubt, and then deny we’ll go to Hell (assuming, of course that all the other stuff isn’t bullshit).
Once doubt met logic, the scales began to tip. As hope and ignorance fell away, the triangle of faith became a circle of reason. Now here I am with only my experience to trust and only myself to believe in. I have only myself to blame for my failures and no where existential to look for support in times of crisis. I am the master of my own destiny. And you know what? It’s pretty sweet. There is great relief in rising from the attitude of penitence. There is liberation in knowing the laws of man are sufficient, and that progress, both social and scientific, is a good thing. There is great motivation in knowing I have only one lifetime in which to accomplish and experience everything I desire to.
I am not writing this as a condemnation of anyone else’s faith. It is not an argument for atheism. This is just my testimony. As for who is right and who is wrong, only the dead have seen the ending.
Advertisement

One thought on “My Testimony”

Stuff I blog about

Recollections 54 The Art of David Tripp

nicole sundays - growing up but make it tragic humor

brought to you by Cheez-Its and crippling despair

Part time actor, aspiring writer of poetry and prose and full-time idiot with a heart.

where would-be writer works with words

Thoughts of the Fallen

A collection of nonsensical words thrown together

postcards of the hanging

We've all got a story to tell.

I write books--cuz I love words. Sometimes they love me back.

WITHIN ARE PIECES OF ME

Gotta Find a Home
I'm Too Stupid to Travel

A travel blog for those of us who get lost, stay lost, and make poor decisions throughout.

The League of Mental Men!

A Satirical Word In Your Shell-Like Ear

Life Inside My Head

Random bits of nonsense, hurling thru cyber-space at the speed of thought.

The Frank Diary of Anna

What to do with all these ideas, memories, and opinions that compete for prescence in my conscience?

A Day In the Life Of A Cloud